We are a “Clean & Establishment” and we honor our promise to continue to surprise you.

BLIND opened in February 2020, and is a tribute to José Saramago´s novel, Blindness, and is an invitation to a journey that does not end on the palate.
BLIND's gastronomic proposal is deeply rooted in the memories of chef Vitor Matos and in Portuguese ingredients with a strong international connection, a know-how that values ​​the excellence of technique, seasonality, and the origin of the products.

In a relaxed but careful atmosphere, BLIND GASTROBAR's proposals reveal a kitchen in harmony with the environment that surrounds it, a space that, in the words of Vítor Matos, “breathes and lives to the sound of good times”. The Bar, which occupies the center of BLIND, is the perfect host for signature cocktails or the Cigar Menu and serves as an antechamber to the outdoor terrace by the pool. Blind´s Master Vitor Matos
With a professional career divided between Portugal and Switzerland, Chef Vitor Matos began his life in the art of haute cuisine by attending the Cooking and Pastry course in Neuchâtel (Switzerland).
Throughout his almost 20-year career, Vitor Matos has been a judge in a variety of competitions and a guest speaker at various congresses and seminars. As a chef, he has won several honours, including the titles Chef of the Year 2003 (Taste Editions), Chef of the Year 2013 (WINE Magazine Awards), Best Chef of Portugal 2014 (Arco Atlântico Gastro Awards) and the Prix Chefs de l'Avenir 2011 (International Academy of Gastronomy, Paris).
Chef Vitor Matos strives to use genuine and fresh seasonal and regional products, enhancing the power of your taste buds. His Mediterranean influenced cuisine constitutes a balance between tradition and new gastronomic trends.

BLIND EMOTIONS
Close your eyes and embrace a great journey of flavors, where your emotions will be tested.
Our new ”Blind Emotions” menu consists of an experience of either 8 or 10 moments. You can accompany them with our delicious Blind wines.
Whatever you choose, your Blind Date will be a surprise for all your senses! GASTROBAR
Simplicity, flavor and comfort food are the keywords to describe the Gastrobar menu.
Enjoy delicious food, snacks, and drinks in our colorful floral patio with a small swimming pool. Discover this hidden treasure in the heart of the city. 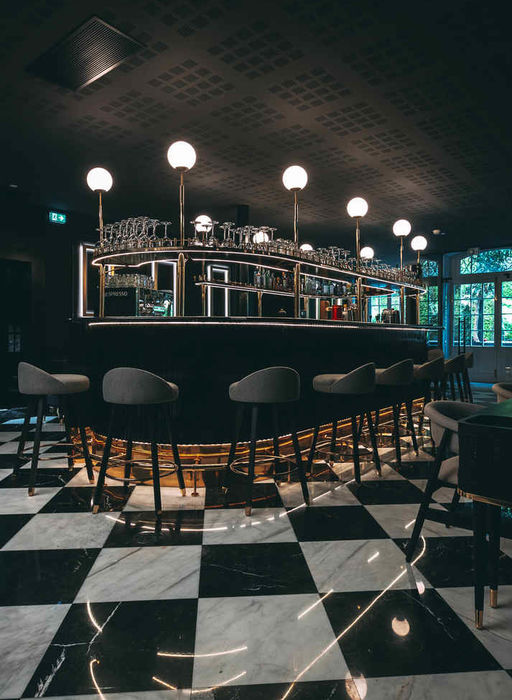 BLIND BAR
Signature cocktails, cigars and cigarillos are the star products of our bar.
Without revealing the secret of its composition, we design cocktails for all tastes.
We have sweet and citrus cocktails. Common to all of them is their delicious taste.